Imitation Of A Woman To Love 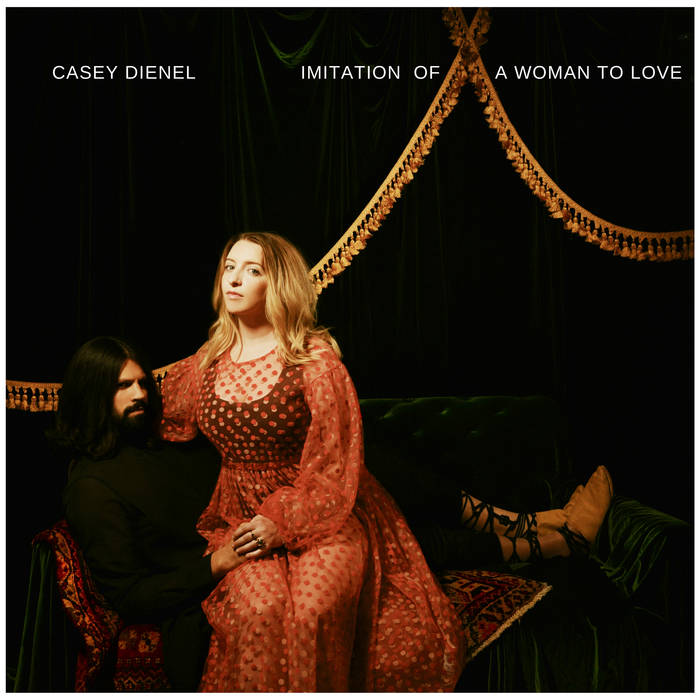 Paul Cooke This was my top album for 2017 and it deserves so much love and support, I was listening to it over and over again, so awesome, I'm looking forward to the next album.... Favorite track: True Affection.

Nancy_Nancy I've been thinking about you for four days! )) and about your music, it did not go out of my head and especially the track : Nancy ! Very amazing album ! good thanks you !!!

litmajor_collection Casey Dienel has been someone I've had stuck on my radar for years, now, and this new album does not disappoint. Groovy, icy, and full of heart. Favorite track: Thrasher.

Ernesto Almeida I love her voice

All synths, vocals, and programming by Casey Dienel unless otherwise noted

Produced by Casey Dienel at Ursula B in Brooklyn, NY and The Glades in Scituate, MA

Mixed by Matt LeMay at A Question Of Frequency in Brooklyn, NY

Casey Dienel is a producer, singer and songwriter who under her given name and the moniker White Hinterland has released 4 critically acclaimed full-length albums. Raised in New England she has spent the last ten years creating music Nylon Magazine describes as “wild, vicious, poetic, feminine, brash, and singular.” She divides her time between her studios in Scituate, MA and Brooklyn, NY. ... more

They say we shall be given
all the love we deserve
When the waitress came back with the check
I thought
“is that all that I’m worth?”

Life’s a non-linear narrative
My mask is peeling at the corners
You drove us through a blizzard and skid into a field of corn
“I think I see the real you,” you said.

One sided as a side show act
That week together was one of the best in my life
So this is how the other half lives?
Is this how it feels being alive?

Even at our worst
I loved you above all the rest.
Track Name: High Times
You were on my mind
when I pulled  into Palm Springs
Ah! But you disappeared by the time he undressed me
I don’t recall his name
sounded like Adam, maybe it was John
He was doing the butterfly
In the deep end and I
“The fly in aspic”
So clean cut and tan
All American
Slightly older but no wiser than me

CHORUS
Ooh I know how you think girls get wet
dreaming about you all the day, all the day long
But ooh when someone new catches my eye
I know I’m not yet done having my fun
I’m looking for Mr. Right Here Now

I can be so forgiving
When I know my time is limited
He said some things that seemed borderline basic
But when he took off his shirt I acquit him
Mmmm, not too deep down inside lives a man who behaves
Like Rock Hudson on Spring Break
And this hotel’s like coming down from a cleanse
After a week living on juice
You’ll only want cake

CHORUS
Ooh I know how you think girls get wet
dreaming about you all the day, all the day long
But ooh when someone new catches my eye
I know I’m not yet done having my fun
I’m looking for Mr. Right Here Now

We ride through the Marigny
newly gentrified
while the second line marches by
are we living or slowly dying?

We ride through the Marigny newly gentrified
While the second line marches by
Are we living or slowly dying?

Big nose, butterface
Pray for skin so thick nothing penetrates

My summer goal was to go
From a 6 to a 4 til 2 was too big
All i wanted was to be a 10
Diet-coke, gluten free
Salad bar, skip the lunch
Calorie count, binge
That’s when the shame hits me

Too curt, too quick
Well shit,
Have at me
You want what’s left?
Better up and hurry for my

My summer goal was to go
From a 6 to a 4 til 2 was too big
All I wanted was to be a 10
Diet-coke, gluten free
Salad bar, skip the lunch
Calorie count, binge
That’s when the shame hits me


GREEN ROVER HUGS THE DEVIL’S CURSE
THE ROAD WAS ALL CLEAR WHEN I STARTED MAKING THE TURN
EMPTY THE CONTENTS OF MY LIFE OUT
ON MY FRONT LAWN, THEY’RE FOR SALE
YOU SAY YOU’LL NEVER BE A SELL OUT
FROM THE VIP LOUNGE

Take me to the beach, you and me, one last ride
My hair's a mess, dress undone, tangled up in you
One last time

Tell you what you want
Not what you need to hear from me
See you racing down that aisle now,
I pray for her sake you don’t trip
Though I can forgive you I could never forgive me
If I took you back in
After all you've done to me

When she asks “who is she to you?”
Do you say “just a friend?"
Do you cast me as Sada?
“Two of us forever” painted on your chest

Thought you were the love of my life

I’m not your rosebud anymore

(Pause for the bass)

Tom says he likes girls
Who are down for whatever
Down for whatever
Yeah, that’s me
When I got there his face was buried
In his phone
Where two young Asian girls
Were taking turns riding on a Sybian machine
Instead of registered shock
I thought
At least he’s into girls who know how to share
I’m trying to be less selfish
He said "it’s not that i’m turned off
Just that i’ve become accustomed
to girls like you shaving themselves for me"

HERE IT COMES FOR YOU

NOT FOR A MOMENT
NOT FOR AN INSTANT
DID I ASK
"IS IT TIME TO STOP?"


"SO YOU GOT A DREAM
WHAT GOOD’S IT GONNA DO?
CHUCK IT IN THE SEA,
THEY SAY
"PICTURES OR IT NEVER HAPPENED TO YOU"
TIL IT COMES FOR YOU
THE PEOPLE BUZZ AROUND
BLEED INTO A BLUR
NO REGARD FOR ANYTHING LIVING
LIKE THE EARTH’S AN APPLE
AND WHEN WE’RE THROUGH
WE CAN START ANEW

NOT FOR A MOMENT
NOT FOR AN INSTANT
DID I ASK
“COULD THIS BE REAL?”


HEMINGWAY FEELS  YEARS AGO
CAN’T THINK HOW FAR I’VE LEFT AHEAD
BONNIE I SHOULD KNOW BETTER, I KNOW


CHORUS
WHEN THE WAVE PULLS ME UNDER
I HOLD FAST TO MYSELF KEEP ON THRASHING
WHEN THE WORLD TAKES MORE THAN YOU OFFERED
HOLD FAST TO YOURSELF, REACH OUT, DON’T WAIT

FOR IT TO COME TO YOU
REACH OUT, DON’T WAIT


It's a cheerleader they want, baby
That’s my cue to pass on this rose
Take the lines they planned to feed me
give the understudy my role
There’ll always be
Someone pretty and young
to replace us when they're done

And they'll say
They never meant us harm

I think I’ve learned my lesson


THE GAME CHANGED ME

Bandcamp Daily  your guide to the world of Bandcamp

Featuring Gary Bartz, 5 years of Rhythm Section Intl and an LP of the week by Nicolas Jaar